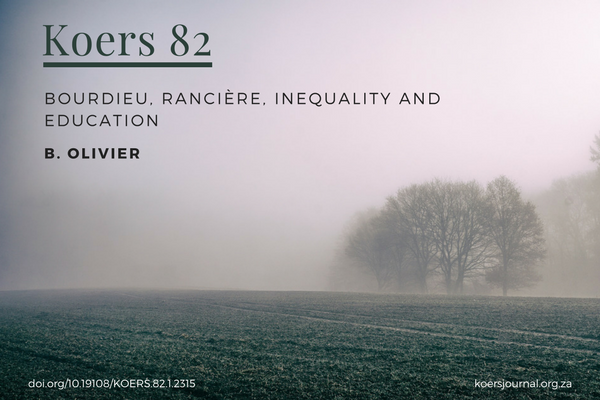 This paper is an exploration of the respective approaches of Pierre Bourdieu and Jacques Rancière to education, specifically the question, whether education has a significant ‘effect’ or influence on social inequality. Bourdieu’s work is presented in terms of his well-known and related concepts of cultural capital and habitus, where the latter is understood as a largely unconscious cultural predisposition or attitude that is the result of cultivation as a function of cultural capital, that is, the symbolic-cultural manifestation of distinctive class taste. It is argued that, although Bourdieu is critical of inequality in French society, his research has shown that it is endemic to that society, and that education, which begins at home and continues through school to university – including ‘ordinary’ universities as well as the prestigious ‘grand écoles’ of France – is the main mediating institution in the establishment, reinforcement and legitimation of social inequality in the highly stratified French society. In contrast to Bourdieu’s work, which seems to be unable to move beyond the description and theorisation of a society that is (apparently irredeemably) characterised by inequality, for Rancière equality may be approached as an ‘hypothesis’ in need of confirmation, and there are several strategies to pursue this, one of which is to adopt the principle of ‘ignorance’ on the part of the teacher, in order to demonstrate the ability of students to ‘teach themselves’ once they have the requisite material – a reference to Joseph Jacotot, who adopted this approach in 19th-century France, with unexpectedly affirmative results. Furthermore, Rancière criticises Bourdieu for supplying the means to ‘distribute the sensible’ in a hierarchical manner, effectively excluding workers from the ‘polis’, on the grounds that they do not share the capacity of ‘logos’ with other citizens (such as the elites). Rancière therefore claims that Bourdieu simply accepts the immutability of hierarchical class divisions in society. The usefulness of these two thinkers’ work for education in South Africa is explored in this paper.

University of the Free State