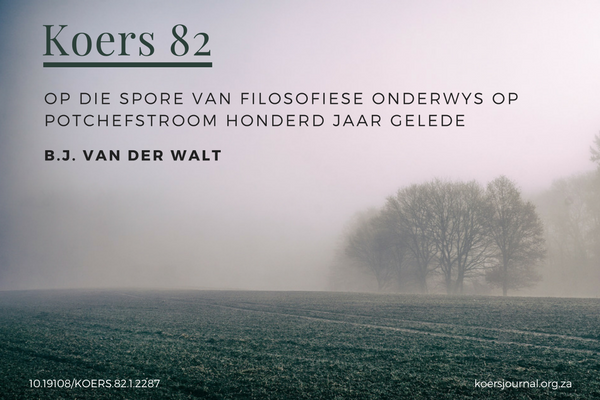 Abstract: Tracing philosophical education at Potchefstroom a century ago

It is to be regretted that the history of education in Philosophy at other universities, like the Free University of Amsterdam, the Netherlands (established in 1880) has been documented in several publications, while very little is known about who taught and what was taught in Philosophy during the early days of the later to be known Potchefstroom University for Christian Higher Education (established already in 1869).

The introduction indicates that also about the teaching of this subject in general in South Africa not much has been documented. Nevertheless, from the start philosophy was regarded as an important part of the academic curriculum for the training of future ministers and teachers of the Reformed Churches in South Africa. From about the second decade of the twentieth century, two types of Christian Philosophy emerged more clearly. Prof. Ferdinand Postma (1879-1950) taught in the line of the logos-philosophy of his Dutch mentor, Jan Woltjer (1849-1917), but no traces of this tradition was left after Postma. Prof. Sietse Los (1871-1944) followed the Herman Bavinck-line, the influence of which was still discernable in the philosophy of H.G. Stoker (1899-1993). This investigation focuses on the philosophical tradition represented by Los a century ago.

This reconnaissance consists of the following four main parts. Firstly, it investigates the historical background of Reformed theology, especially as it was represented by A. Kuyper and H. Bavinck, the mentors of Los. This is secondly, followed by some biographical notes on Los.

The third, main section, is devoted to an analysis of Los’s philosophical anthropology from seven of his books published in South Africa and the Netherlands between 1904 and 1944. His view of being human boils down to a Christian-biblicist reinterpretation of preceding Aristotelinising and Platonising ideas about the human being. He supported Aristotle’s and his subsequent followers’ in the Christian tradition in their dichotomist view of soul and body as two separate substances. But he combined their anthropology with Plato’s and his Christian followers’ view that the human soul itself should be divided into three functions (a trichotomy) of intellect, will, and emotion.

The fourth section concludes with an evaluation of some weak as well as positive points in Los’s contribution to philosophical education at Potchefstroom during the early days of the previous century.