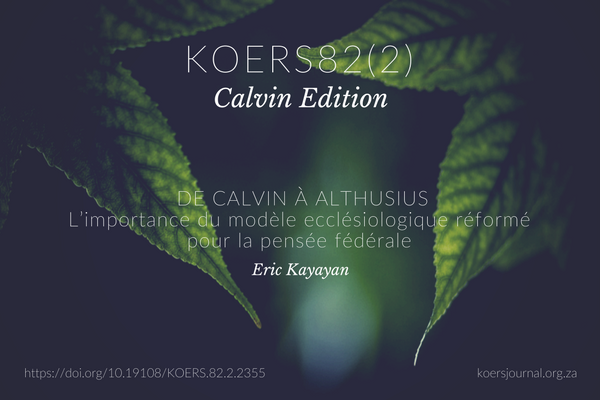 In this article, the relationship between Johannes Althusius’ federal views of civil government – as expressed in his Politica methodice digesta – and John Calvin’s conception of the role and function of public authorities, is examined in the light of three sermons on Deuteronomy 17 preached by Calvin in 1555.  The discussion takes its starting point in the consideration of the kind of politico-theological connection denied or ignored in today’s secularized France, with a particular historical reference to the regime of the Terreur in 1793-1794. The question of the influence which Calvin’s ecclesiology as well as subsequent Calvinistic ecclesiological developments in the Netherlands may have had on Althusius’ theory of government and of political life is raised in the light of the fact that Althusius not only held a degree in civil law, but also in Church law (both obtained in Basel the same year, under strong Luthero-Calvinist influence). If elements of a relation do indeed appear, they still remain to be established with more precision. Still, in their views both Calvin and Althusius clearly point towards a unified vision of society under the norm of God’s rule. With Althusius, this norm – embodied in the Decalogue – is refracted in the various spheres constitutive of human activity associated with each other in a federative way, each one retaining its own mode of operating.