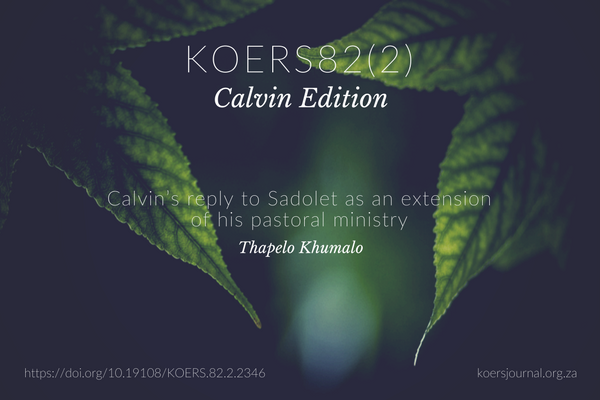 In his concise autobiography in the dedication to the Psalms commentary Calvin made it plain that his role was primarily as a pastor; he compared his role in the church to that of King David in Israel: “And yet, as he [David] was elevated from the sheepfolds to the highest position of authority, so God took me [Calvin] also from obscure and small beginnings and honored me with the office of herald and minister of the gospel.” (Calvin, 1958:51.) Beza (1564:9), Calvin’s contemporary biographer, in Life of John Calvin also described Calvin as primarily engaged in pastoral ministry. This paper will investigate and analyse the theological acumen and the pastoral tone in Calvin’s treatise, Reply by John Calvin to the Letter by Cardinal Sadolet to the Senate and People of Geneva. This reply to Sadolet exudes outstanding intellectual brilliance and an unwavering pastoral concern that characterised Calvin’s entire ministry and literature. A study of this treatise reveals that even in this theological work, Calvin was practising his pastoral ministry.