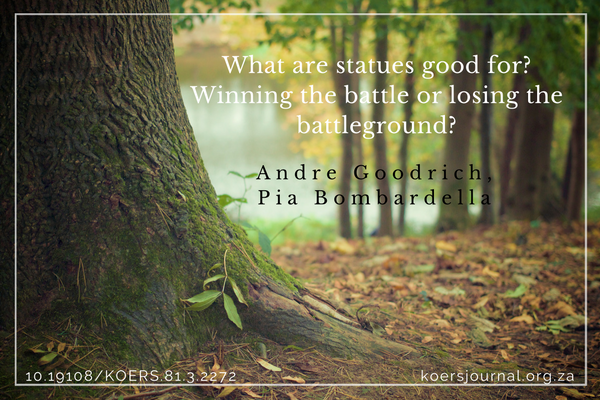 In South Africa the practice of toppling statues is as old as the practice of erecting them.  The most recent episode in this history began in 2015 with the Rhodes Must Fall campaign at the University of Cape Town, from where it rapidly spread to sites throughout South Africa.  Confronted with the fact that 97% of South Africa's 3500 declared heritage sites related to white values and experiences at the end of the apartheid era and that there has been little progress towards crafting a more representative heritage landscape, one cannot dispute the Rhodes Must Fall assertion that South African statues anachronistically honour the leading figures of South Africa's colonial and apartheid past.  Observing that public debate around the statues was rapidly polarised into two camps, those who would defend the statues and those who would destroy them, this paper argues that neither option sufficiently addresses the multiple meanings of statues.  By examining the changing public history discourses of the 20th century we propose a third approach grounded in post humanist arguments about the limitation of critique and the promise of care as an ethical, affective and practical pursuit.  We argue that this post humanist approach to the question of what to do with statues in South Africa is capable of transforming them from fetishised objects of offence or of heritage into into points around which new publics can gather and through which the historical ontology of contemporary power dynamics can be accessed, interrogated and acted upon.