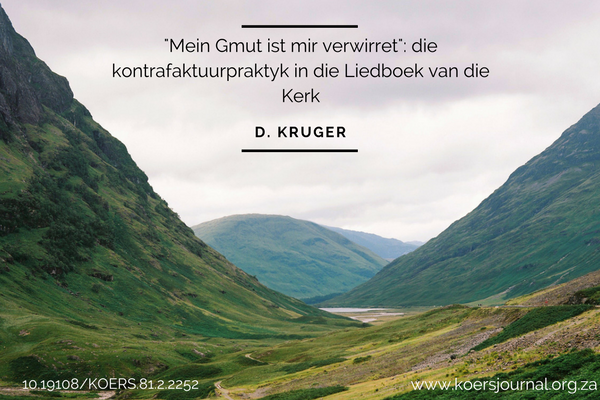 The contrafactum-practice which utilises secular melodies and/or texts as sources in the creation of sacred hymns, is an age-old tradition. This practice generated amongst others a few Protestant hymns (particularly in the German Reformed context), which are viewed today as important hymns in the hymn corpus. One example would be the hymn for lent, “Herzlich tut mich verlangen”.

In several historic sources the use of secular melodies in church hymns is motivated: the fact that the melodies are already well-known amongst the congregation would make it easy to learn the new texts. Sources also confirm that this practice makes the songs more accessible for the youth.

This article explores the development of selected hymns from the Liedboek van die Kerk (2001) (“Afrikaans Hymn book of the Church”) to determine their secular roots and describe how they developed into sacred hymns. It is pointed out that the utilisation of the melodies as settings for different sacred texts, illustrates their quality and flexibility and is instrumental in their acceptance as hymn tunes. It is also argued that historic distance between the secular source and the church hymn contributes to the weakening of the original secular association. The ongoing debate on the secular versus the sacred is also touched upon, and finally the renewed interest in contrafacta in the late 20th and early 21st century is discussed.